Coordination of Benefits (COB) refers to the set of rules that determines responsibility for payment among all health plans that cover an individual. You must keep the Plan informed about all other health coverage that you have or are eligible to receive, so that the plans can properly coordinate your benefits.

The Plan coordinates benefits with all other group and private health plans, as well as Medicare. The Plan also coordinates benefits for married couples who are both eligible for coverage as Participants in the Plan and for the Dependent children of two eligible married Participants. If a parent and a child are both Participants, the Plan will coordinate benefits with respect to the child’s coverage. However, since under Plan rules the parent cannot be a Dependent of the child, the parent will only be treated as a Participant and will only have his or her own coverage.

If you qualify for coverage with the Plan and another health plan, it is important that you understand the impact of choosing whether or not to pay the premium for either the Plan or the other plan(s).

COB rules can be difficult to understand. Therefore, we strongly recommend you contact the Plan to discuss your individual situation when deciding whether or not to pay a premium for coverage. You should also contact your other plan(s), as plans have different rules for coordinating benefits.

Determination of Primary Plan and General Rules for COB

Whichever plan is designated as the primary plan pays first on your Claims. If a balance is still due after the primary plan’s payment, the Claim should be sent to the secondary plan for consideration (and, if applicable, a third plan and so on).

In determining which of the plans is primary or secondary (or third), the Plan will apply the rules outlined below. The first rule that applies to your specific situation will be followed.

In the case of a dependent child where the parents are divorced, the rules are:

Coordination of Benefits With Other Entertainment Industry Health Plans

Important Note:
While we have done our best to provide an explanation, the Plan’s Entertainment Industry Coordination of Benefits (EICOB) rules can be difficult to understand. We strongly suggest you contact the Plan to discuss your individual situation.

If you are entitled to primary coverage with another entertainment industry plan but fail to pay the premium in that plan, the SAG-AFTRA Health Plan will maintain its secondary position. The Plan refers to this as the Entertainment Industry Coordination of Benefits (EICOB) rule. This rule was incorporated to maintain the correct primary and secondary positions of the health plans based on your longest continuous coverage.

Other entertainment industry plans subject to the EICOB rule include the Directors Guild of America-Producer Health Plan, the Equity-League Health Plan, the Motion Picture Industry Health Plan and the Writers’ Guild-Industry Health Fund. These rules apply to Participants and Dependents in the Plan, regardless of whether you have Earned Eligibility or you are eligible for Dependents of Senior Performers or Surviving Dependent coverage.

If you do not enroll in your primary coverage, the Plan will maintain its secondary position by only paying up to 20% of the Allowed Amount for your Hospital and medical Claims, including mental health and substance abuse Claims, subject to the Deductibles. For prescription drug benefits, you will not receive an Express Scripts ID card. You must pay for your prescriptions at the pharmacy and submit a Claim to the Plan for reimbursement of up to 20% of the Allowed Amount, subject to the out-of-network medical Deductible. Dental and vision benefits will continue to be administered through Delta Dental and Vision Service Plan as if the Plan is primary.

The following exceptions to the EICOB rule apply in the situations described below:

Coordination of Benefits With HMOs

If you or your Dependents have primary coverage with an HMO (including a Medicare HMO), you must use Providers in the HMO’s Provider network. When you do, the Plan will pay secondary for any Copays or Deductibles you may incur. If you do not use HMO network Providers, the Plan will reduce its benefits by 80%. In other words, the maximum the Plan will pay is 20% of the Allowed Amount for the Claim.

It is extremely important that you use your HMO network Providers when the HMO is your primary plan. If you do not, your benefits under this Plan will be reduced and you will have much larger out-of-pocket expenses.

In cases where your HMO excludes specific services that this Plan covers, such as chiropractic care, regular Plan benefits will be paid.

How Benefits Are Calculated

Once a determination has been made about which plan is primary, the benefits are processed as follows.

When the Plan Is Primary

If this Plan is primary, bills should be submitted as outlined under “How to File a Claim.” This Plan will pay benefits based on its rules as if there were no other coverage.

When the Plan Is Secondary

The difference between the COB allowable expenses and what the primary plan paid will be paid by the Plan, provided it does not exceed the amount the Plan would have paid if it was primary. When a BlueCard PPO or Beacon Health In-network Provider is used, if the primary plan has already reimbursed more than the network Contract Rate, the Plan will not make any payment, and the remaining charges become a network write-off. You are not responsible for the balance.

To better understand how this works, refer to the examples outlined below. Both examples assume that the Participant is enrolled with Plan I coverage, is using an Out-of-network Provider and that the Deductibles have been met.

Coordination of Benefits With Medicare

If you are age 65 or older and you have COBRA, Senior Performers or Surviving Dependent coverage, Medicare provides primary coverage and the Plan provides secondary coverage. With regard to Earned Eligibility, federal law requires that this Plan be primary to Medicare for active Participants who are age 65 or older. The rules in the table below should be applied to determine whether or not you have Earned Active Eligibility or Earned Inactive Eligibility.

It is possible for your status to change from year to year. For example, if you have Senior Performers coverage and satisfy the minimum Covered Earnings requirement through a combination of residual and sessional earnings, you regain Earned Active Eligibility and the Plan becomes your primary plan. In the next year, if you only have residual earnings, you change back to Senior Performers coverage and Medicare would become your primary plan. Senior Performers and Surviving Dependents cannot gain Earned Inactive Eligibility. If the minimum Covered Earnings requirement is satisfied solely through residuals, these individuals keep their Senior Performers or Surviving Dependent eligibility.

The Plan will notify you of any change in your eligibility and can tell you which plan is primary at any time.

If you or your Dependents qualify for other health coverage in addition to the Plan and Medicare, please contact the Plan to determine the order of Claims payment. The Plan’s Entertainment Industry Coordination of Benefits (EICOB) rules will apply in this situation and can be difficult to understand.

How Benefits Are Calculated When Coordinating With Medicare

The Medicare COB method described in this section applies to all Participants and Dependents with Medicare except those that received Senior Performers or Surviving Dependent benefits under the Screen Actors Guild–Producers Health Plan prior to January 1, 2017. For those Medicare COB rules, see below.

Medicare pays its benefit allowances first for Hospital or medical services that you receive and the Plan pays its benefits second based on the Plan’s in-network reimbursement provisions. Before the Plan begins to pay a benefit, you must satisfy the annual in-network Hospital and medical Deductibles.

The total benefit paid by Medicare and the Plan will generally cover less than 100% of the Medicare allowance. Participants usually will have an out-ofpocket expense, regardless of whether or not they have satisfied the Plan’s in-network Deductibles.

To better understand how this works, refer to the examples outlined below.

In this example a Plan I Participant receives medical services and has not had any expenses applied toward the Plan’s in-network medical Deductible of $250. The following additional assumptions are used: 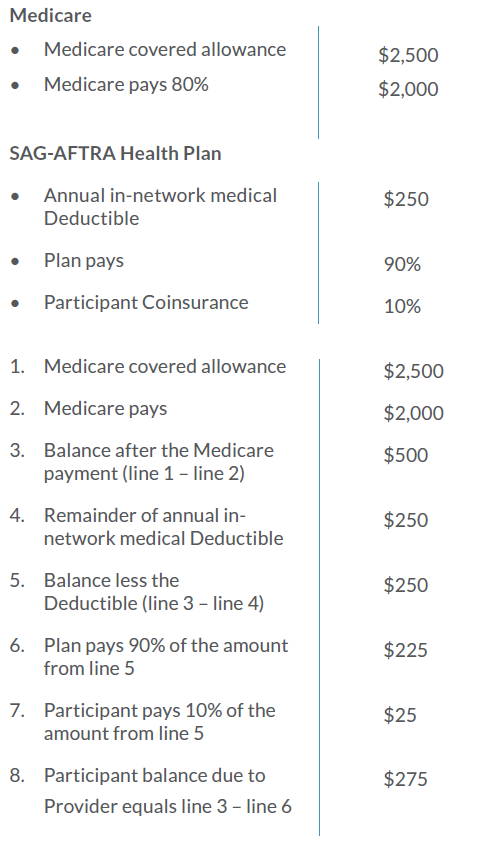 In this example the Participant has satisfied the Plan I annual in-network medical Deductible of $250. All of the other assumptions are the same used in the previous example. 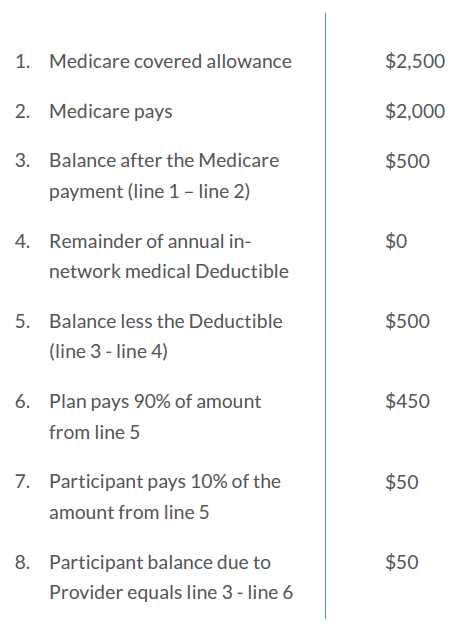 The Plan will calculate its benefits as if you had received benefits from Medicare even in the following situations.

Individuals Who Received Senior Performers or Surviving Dependent Benefits Under the SAG-Producers Health Plan Prior to January 1, 2017

If you received Senior Performers or Surviving Dependent benefits under the Screen Actors Guild–Producers Health Plan prior to January 1, 2017, the SAG-AFTRA Health Plan will coordinate benefits with Medicare using the method described under “When the SAG-AFTRA Health Plan Is Secondary.” However, the Plan will reduce benefits by 80% for Medicare beneficiaries under the three situations described above. This is because the Plan will pay Claims only on a secondary basis, as if you received primary reimbursement from Medicare.